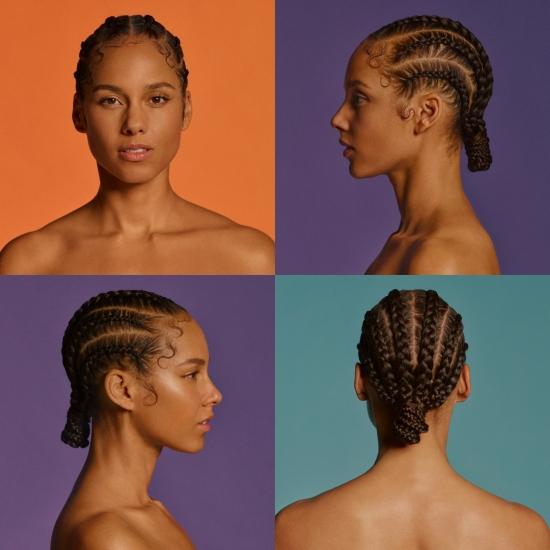 The singer’s seventh studio album ALICIA has been delayed two months but now it is here.
She released six singles in advance of the album, three before the original release date and three throughout the last six months. The first three all got a lot of airplay, with lead single “Show Me Love” feat. Miguel and followup “Time Machine” cracking the Billboard Top 40, and third single “Underdog” peaking at second overall. “Perfect Way to Die,” “So Done” feat. Khalid and “Good Job” were the other singles.
Alicia Keys is a modern-day Renaissance woman—a 15-time Grammy Award-winning artist/songwriter/musician/producer, an accomplished actress, a New York Times best-selling author, a film/ television and Broadway producer an entrepreneur and a powerful force in the world of activism. Since the release of her monumental 2001 debut album, Songs in A Minor, Keys has sold over 65 million records and built an unparalleled repertoire of hits and accomplishments. Keys’ forthcoming seventh studio album ALICIA is slated to be released worldwide later this year. The first single “Show Me Love” earned Keys a record-extending 11th number 1 on the Billboard Adult R&B Songs airplay chart. Keys released her new book More Myself: A Journey on March 31, 2020 via Flatiron Books, which debuted…
“The best thing about releasing new music is being able to perform it for the first time live! It’s so exhilarating to experience it alongside beautiful people from all walks of life. I’ve missed performing so much and this is going to be a once in a lifetime visual, musical and emotional experience. “I cannot wait to take you deeper into this new album ALICIA, and all our human complexities. I know it will bring us closer. And we need that more than ever now!” (Alicia Keys)
Alicia Keys

Alicia Keys
Alicia Keys was born in New York in a musical environment dominated by stars like Biggie and Jay Z. The natural talent of the young Alicia Keys was soon transformed into an explosive mixture of hip-hop and soul, with an incredible ability to create good songs as a composer, showing a maturity that one would expect in a young age. If we add all the vocal strength of Alice, his heartfelt live performances and his experience as a classical pianist, is easy to think that Alicia Keys has a good chance of becoming the new Roberta Flack of our generation.
From the beginning, Alicia Keys has been the subject of genuine dispute between some of the major record companies in the world, in their desire to incorporate into its catalog of artists to a star with so much future. Finally, Alicia Keys has signed its first contract with Arista Records in 1998. With a talent similar to that of artists like D'Angelo or Prince, continued to develop the writing, producing and recording his first album, an album in which he began working at age 14.
In late 1999, Alicia Keys followed the footsteps of Clive Davis when he created his own label, J Records, distributed by Arista, where he continued to shape its anticipated debut album. The themes show the unmistakable symptoms of finding a star of critics and audiences, through songs melodic, deep and full of content that allow us to discover in all its glory Alicia musical. Most of the songs on the album, including a composition as bright as Fallin 'Troubles shocking or have been written and produced by herself. In addition, Alicia Keys has worked with Jermaine Dupri and Isaac Hayes Girlfriend in Rock wit U, an issue that was included in the soundtrack to the film Shaft (2000).
Alicia Keys won five Grammys in 2001, including Best New Artist and Song of the Year (for the track Fallin ').
In 2003, he presented his second paper, "The Diary of Alicia Keys", an album that takes as its inspiration the American music of the seventies. Through this work, Alicia Keys got eight more nominations for a Grammy.Alicia Keys.
In 2005 appears "Unplugged", the acoustic MTV dedicated to the artist and debuted at number one in sales in the United States. With this album, Alicia Keys got four new Grammy Award nominations.
Published in 2007 Alicia Keys 'As I Am', her third studio album after the successful 'The Diary of Alicia Keys', published in 2003. With the song 'No One', as the first single, reached No. 1 on Billboard's list of only ten hours after it began to sound in the U.S. radio. Alicia defined as 'an encounter between Janis Joplin and Aretha Franklin', 'As I Am' shows his talent for composition and production. and the situation as one of the few artists able to capture the spirit of the old school and update. In late 2009 Alicia Keys releases her fifth album, entitled "The Element Of Freedom", which includes a duet with Beyonce and a DVD with an intimate live recording of three of the most representative of the album, and their great success and No One Does not Mean Anything music video.