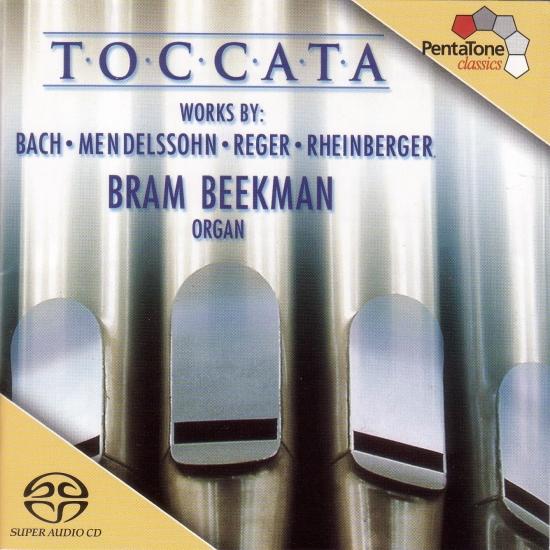 Almost two centuries passed between the creation of the first and last pieces on the CD programme at hand, which was recorded by Bram Beekman on the De Rijckere organ in the Oostkerk (East Church) in the Dutch town of Middelburg. Almost 200 years in the wide-ranging history of the organ separate both the D-minor Toccatas by the German organ masters Johann Sebastian Bach (1685-1750) and Max Reger (1873-1916).
The Toccata and Fugue in D-minor, BWV 565, written before 1708, is probably Bach‘s most popular organ composition. With its turbulent unison runs, raging passage work and agonised, diminished harmonics, it is a fantastic mirror image of the playful-virtuoso possibilities of the organ. The Fugue takes up the imperious and insistent air of the first movement (Adagio) and carries it to an abrupt end, before the outcry of the Toccata coda finally subsides after a gigantic final cadenza.
If we were to consider the two works by Bach – both his Toccata and his arrangement of Vivaldi‘s Concerto Grosso RV 565 for two solo violins from L’estro armonico – as the beginning of our journey through German organ music, then Max Reger‘s Toccata in D-minor would be its final destination. The Toccata No. 5 from his 12 Pieces, Op. 59, written in 1901, immediately fulfils at the opening all demands required of the „toccare i tasti", i.e. of „sweeping one‘s hands over the keys ", and as such is worthy of Bach‘s heir in this genre. The common ground between both composers – their thinking in great, autonomous and antithetical musical lines – is clearly demonstrated in both works. However, the journey from Bach to Reger contains many exciting stop-overs.
The massive and lasting influence of Bach‘s organ works is especially audible in the works on this recording by Bach‘s pupils Gottfried August Homilius and Johann Ludwig Krebs. Gottfried August Homilius (1714-1785) was one of the most eminent Cantors of the Dresden Kreuz church, where he was employed from 1755 onwards. In the field of organ composition, he was most interested in the liturgical genre of chorale arrangement. His chorale preludes Mache dich, mein Geist bereit and Hilf, Herr Jesu, lass gelingen already show some signs of early Classical influence, most noticeably in the relative freedom of style employed. Johann Ludwig Krebs (1713-1780) received his musical education at the St. Thomas school in Leipzig and, at the same time, was a private pupil of Bach‘s. The elder composer eventually paid him a magnificent compliment, saying that he was the „einzige Krebs im Bache" (a play on words in German, meaning literally that he was the only crab in the stream). However, Krebs succeeded partially in becoming more than just a Bach imitator, as is proven in his excellent Trio in E-flat. Johann Christoph Kellner (1736-1803) suffered the same fate as many of his contemporaries, overshadowed by the genius of Bach and Haydn, who remained for the most part unknown. His Prelude in C is characteristic of the art of the Prelude and Fugue dating from the late 18th century.
The historical, long-distance relationship between Johann Sebastian Bach and Felix Mendelssohn-Bartholdy (1809-1847) was of special importance as far as the history of music is concerned: after all, Mendelssohn gave the St. Matthew Passion its first modern performance in 1829. During his lifetime, the Romantic composer Mendelssohn was an admirer of the compositions of the high Baroque. In his Six Organ Sonatas Op. 65 – a late work dating from 1844 – Mendelssohn, who had already left the world of Classical music far behind in his piano music, returned to Bach‘s contrapuntal style.
Josef Gabriel Rheinberger (1839-1901) is known as the Father of the Organ Sonata, which thanks to him was „cleansed of its cloying, puny, organ-unfriendly traits". And apart from a number of Fughettas, Trios and Monologues, the main part of his oeuvre for organ consists of his 20 Organ Sonatas. The Cantilena from his four-movement, symphonic Sonata No. 11 in D-minor, Op. 148 displays in the elegant proportions of its melodies and the simplicity of its harmonies a more or less meditative character. Text: Jörg Peter Urbach
Bram Beekman, organ 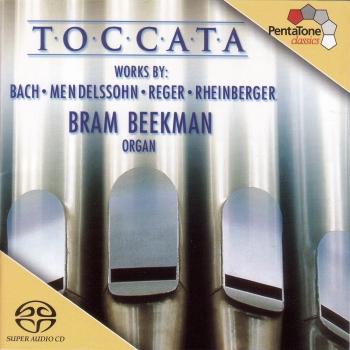