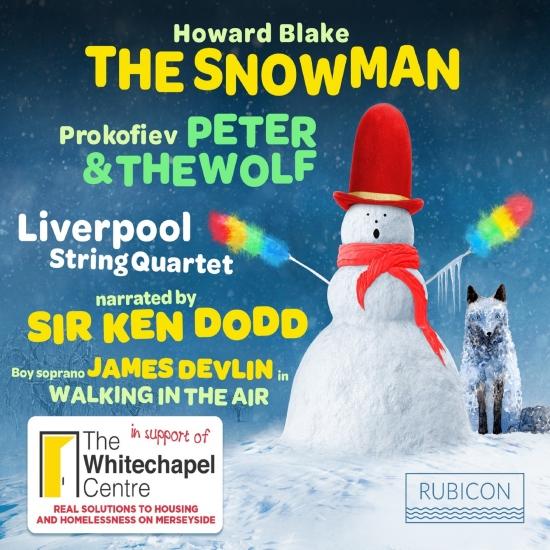 Info for Blake: The Snowman - Prokofiev: Peter & the Wolf

Recording the narrations for Peter & the Wolf and the Snowman was the last project Sir Ken Dodd undertook. One of the UK’s most famous and best loved comedians and entertainers, he passed away at age 90 in March 2018. This famous son of Liverpool was a keen supported of the Whitechapel centre, the Liverpool-based charity that is leading the homeless and housing charity in the region, working with people who are sleeping rough, living in hostels or struggling to manage their accommodation. Rubicon will support the work of the Whitechapel Centre by contributing a percentage of the royalties from sales of the album to the charity that Sir Ken supported.
Howard Blake’s music to The Snowman adapted as a 26-minute animated Channel 4 TV special was first broadcast in 2982, four years after Raymond Briggs’ much loved and best-selling children’s book. It has been staged, become a video game, and the hit song “Walking in the Air,” recorded by Aled Jones in 1985 propelled him to stardom and became a huge hit. Prokofiev’s perennial Peter & the Wolf was composed in 1936 and was written to help children discover the instruments of the orchestra. It is possibly the most famous and successful work composed for children and famous actors and rock stars have contributed their narrations over the years.
Sir Ken Dodd, narrator
James Devlin, soprano
Liverpool String Quartet 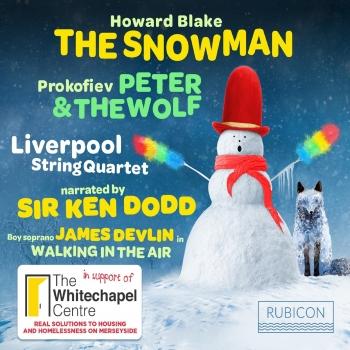 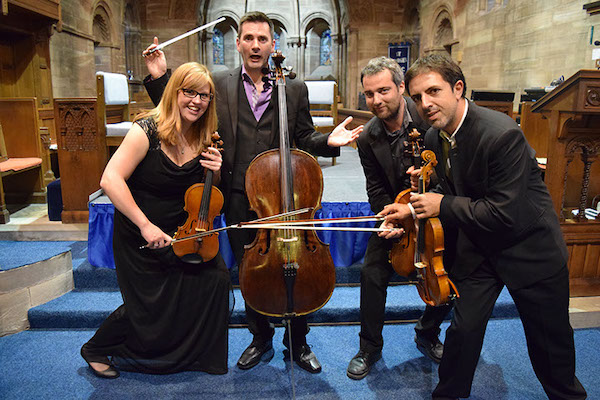 Liverpool String Quartet
Founded in 2010, the Liverpool String Quartet is made up of classical musicians of the highest standard. Collectively, they studied in some of the world’s most prestigious musical establishments, including the Guildhall School of Music and Drama in London, the Conservatory of Music in Valencia, the Royal Northern College of Music in Manchester, The University of Manitoba in Canada, and the Royal Academy of Music in London, and currently are members or collaborate regularly with the Royal Liverpool Philharmonic Orchestra, as well as many other orchestras in England and Spain.
The Liverpool String Quartet gave its first official concert on April 21 2011, in the town of Castellvell del Camp (Tarragona) which was also their first tour outside the UK. In a short but intense career, the quartet have collaborated with musicians such as pianist Kiev Portella, flautist Nelia Sanxis, Sense of Sound Singers, James Clarke (Leader of the Royal Liverpool Philharmonic Orchestra and internationally renowned chamber musician), clarinetists Carles Pertegaz and Francesc Navarro (Barcelona Symphony),Eilidh Gillespie (Co-principal Flute of the Royal Northern Sinfonia) and in 2014 were joined by Raul Garcia Marian (Assistant concertmaster of the Barcelona Symphony Orchestra) The Quartet is proud to collaborate with Catalan Music Company Ars Aurea Sonora, and the Spanish Government, to promote the most outstanding national and international musicians on the scene in Spain and Catalonia.
Since it was founded, the LSQ has toured internationally dozens of times. Highlights include concerts at Castellvell del Camp, at the Teatro Principal de Valls, in the Cathedral of Pamplona, and in Olite, Navarre. In July 2012 the LSQ conducted a tour of the Balearic islands, with concerts in Valldemossa (Mallorca), and in the inaugural concert of the prestigious International Music Festival of Mahon (Menorca). In 2014 they gave a tour of Spain which was funded exclusively by National Water Company "Comaigua" in cooperation with Music Management Company Ars Aurea Sonora and the Catalan Government.
In Liverpool, the LSQ was Quartet in Residence at the Bluecoat Arts Centre in the heart of the city from 2012 to 2015. Notable concerts given in Merseyside have been held at the Williamson Art Gallery on the Wirral, Liverpool’s Anglican Cathedral (with an audience of 1600 people), the Atkinson Art Gallery (Southport), Mayer Hall (Bebington, Wirral), at the new Music Room at the Liverpool Philharmonic and St George's Hall.
During 2014 the LSQ was involved in a project called "Heart Variations for String Quartet" in which the LSQ world- premiered two compositions commissioned for the occasion by recognised Liverpool based composers, Ian Stephens and Meike Holzmann at St George's Hall in Liverpool, with outstanding reviews in the principal arts magazines of the North-West of England.
In 2015, the quartet gave the World premiere of the full string quartet version of the Snowman, specially arranged for the LSQ by its composer Howard Blake, present at the concerts in Poblet and Manresa (Barcelona) and narrated by famous Catalan actor Jaume Comas.
The LSQ recently completed a tour of Spain with renowned Pianist Martin Roscoe performing Franck's Piano Quintet with great success. Since 2016 the LSQ has been ensemble in residence at the Nordic Church, in Liverpool City Centre.

Booklet for Blake: The Snowman - Prokofiev: Peter & the Wolf