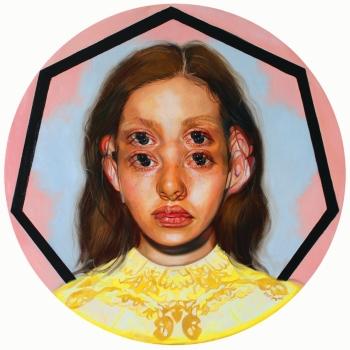 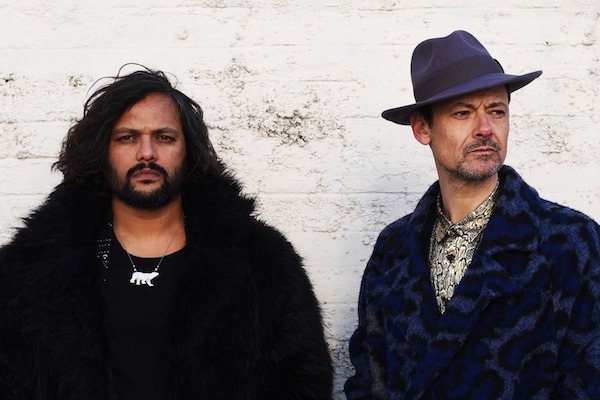 Melt Yourself Down
In an unassuming leafy South London street, Pete Wareham’s sonic sanctuary is enabling London six-piece Melt Yourself Down to create their most vital music yet. The sax innovator’s home studio merges both futurist thinking and time-honoured tradition. Here, state-of-the-art recording equipment sits beneath wall hangings with Tibetan designs — and, essentially, his two treasured saxophones. He produces these with a flourish: huge, hulking things with oxidised patches that look as if they’ve been exhumed from the long-forgotten closet of a roaring 20s jazz club (in fact, they’re only a few years old). “You can have shiny ones that you put lacquer on,” Pete explains, holding a weathered-looking baritone sax. “Or you can have no lacquer, which I think gives you more character, and you have to forge your own sound.”
The desire to create new sonic pathways is an integral philosophy to Melt Yourself Down, whose two critically-lauded albums to date have alchemised influences from noisy No Wave to Nubian rhythms to create an eclectic and pan-global kind of party-punk. But their epochal third album 100% YES (released on the band’s new label Decca) is their strongest statement yet, representing both a peak of musical synthesis for the band as well as a personal triumph.
“After the second album, Melt Yourself Down was at a crossroads,” says vocalist Kush Gaya. “We left our label, we had no certainties, no life vests and very limited resources, it was a live or die situation. We had to change course, and modify our direction to reflect life beyond just the musical concepts and ideas that we had before. The answers soon came as we started looking within ourselves rather than looking out. By starting a process of finding out who we were as people, and how we related to the world around us, we found the music!” Pete agrees: “We had to deepen our process, which we did,” he says. “We really started working on this towards the end of 2016, so loads of shit was happening — Brexit, Trump.”
The result is songwriting with an unflinching focus on the pressing realities of life in Britain today. “Born in the Manor” takes on the Grenfell tragedy amidst looming synths and staccato brass, as Kush’s vocals morph from menacing speak-raps to a desperate wail. Lyrics indict the powers that be whose negligence allowed the West London fire to happen: "Born in the manor / Born in the gutter / For dem it don’t matter / Blacker, whiter, browner / You burn in a tower.” Kush explains: “It’s harrowing. Those lyrics are a shout against the authorities for not really caring whether you're black white or brown.”
The Western world’s political swing towards the right also promoted Kush to further consider his identity as an African-raised, London-based artist of South Asian descent. “That made me definitely look within me,” he says. He was thinking “In the western world, which is predominantly a white world, what's my space in it? How do you place yourself within the world here, politically, socially, but also, musically?"
Those reflections powerfully come through on the album’s searing opening track “Boot and Spleen,” which is partly inspired by the dark history of British colonialism in India. “A conversation that we're having in that song is, ‘What is it to be British?,’” says Kush. “What's that identity now, in 2019? What sort of behaviours are allowed towards minorities, or from minorities towards the majority?”
There’s no simple answer to those questions, but Melt Yourself Down are set to ignite debate by asking them. In this, they play into a great tradition of British insurgents that spans decades and genres, from the Sex Pistols to Radiohead, and from Kate Tempest to Young Fathers. Yet the band’s lineage is also connected to jazz’s rich history of sticking a middle finger to The Man. “Jazz was the wild, dirty music of the 20s, 30s,” says vocalist Kush. “It was not a sit down, polite, experience.” Pete continues: “Jazz doesn’t feel as dangerous as it used to be”
That rawness has begun to be brought back to jazz in recent years — with American artists such as Kamasi Washington and Thundercat, as well as musicians who are closer to home. Last year, for instance, The Observer noted the “British jazz explosion” in a feature that highlighted artists including Shabaka Hutchings, a third of Mercury-nominated band Sons of Kemet and formerly part of Melt Yourself Down. Yet jazz has an under-acknowledged role in the history of guitar music too. “The saxophone was in post-punk and rock’n’roll” says Pete. “It was a dominant sound for a while.”
Prepare for it to become inescapable all over again. Pete, a former member of Polar Bear and founder of Acoustic Ladyland, proves the sax’s true versatility on 100% YES, from a frantic whirligig on “Chop Chop” to a cosmic, tripped-out feel on “This Is The Squeeze.” “You can use the saxophone as a guitar or synth,” he explains. “It can have that same impact as a really massive, full on guitar. [On 100% YES] I think I’ve recorded my best playing so far”
100% YES is a record set to establish Melt Yourself Down at the forefront of today’s music innovators, and a timely document of the increasingly complex nature of Britishness — which nevertheless brims with the optimism that its title suggests. “This record mirrors/reflects??? how we felt and still feel,” says Kush decisively. “If people can recognise themselves in our sounds and words, that's brilliant. But we're definitely not torch bearers for this or that demographic. We're here to portray and reflect what's going on within us and around us.” With their increasingly attuned sense to the world around them and each other, more people than ever will undoubtedly be saying 100% YES to Melt Yourself Down very soon.
100% YES is out now!