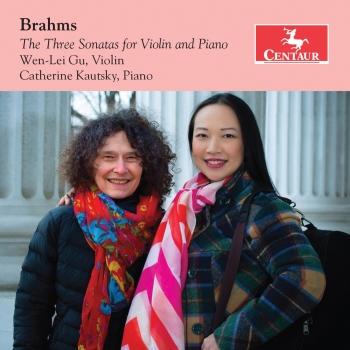 Brahms: The 3 Sonatas for Violin & Piano 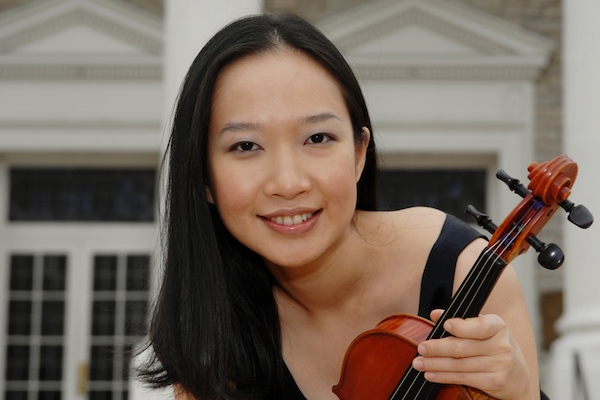 Wen-Lei Gu
Associate Professor of Music at Lawrence University Conservatory of Music in Appleton, Wisconsin, has performed actively throughout North America, Europe, and the Far East as soloist, recitalist, and chamber musician. A winner of numerous awards, she was the gold medalist of the Heida Hermanns International String Competition and China’s Fourth National Violin Competition, the silver medalist in the Yehudi Menuhin International Competition and the Ima Hogg Young Artist Competition. As a soloist, Gu has performed in such distinguished venues as the Berlin Philharmonic Hall, Smetana Hall in Prague, La Sala Verdi in Milan, the Beijing Concert Hall, Weill Recital Hall at Carnegie Hall, Avery Fisher Hall and Alice Tully Hall at Lincoln Center, and the Kennedy Center for the Performing Arts.
Born into a musical family, Gu started to play the piano and the violin at a young age. She made her international debut at the age of thirteen, performing the Saint–Saëns Violin Concerto in B minor in England with Yehudi Menuhin at the baton. Menuhin said of her playing: “sounds like a poem, looks like a painting.” A recipient of the prestigious Presser Award from the Theodore Presser Foundation for outstanding achievement in music, Gu has performed frequently as guest soloist with orchestras and at concert series throughout the world.
Dr. Gu's performance highlights have included performing at the Bach Festival at Carnegie Hall commemorating the 250th Anniversary of Johann Sebastian Bach’s death, appearing at the Kennedy Center for the Millennium Concert Series, performing the Wieniawski Concerto No. 2 with the Houston Symphony to an audience of five thousand, and recital for the Myra Hess Concert Series in Chicago. She was the guest soloist with the Shenzhen Symphony Orchestra and China Beijing Philharmonic on their critically acclaimed concert tours of Europe. Her recent concert engagements have included recital tours in the Far East and Israel, live recital broadcasts on Wisconsin Public Radio’s Sunday Afternoon Live from the Chazen and Chicago WFMT Radio’s Live from WFMT, concerto appearances with the Montreal Symphony Orchestra, Hong Kong Pan Asia Symphony, the Harper Symphony, the Elkhart Symphony, the Fox Valley Symphony Orchestra, the Lawrence Symphony Orchestra, and the Shenzhen Symphony Orchestra.
Gu holds the Bachelor of Music degree from the Juilliard School, and the Master of Music from the Mannes College of Music in New York. She received her Doctor of Music in Violin Performance from the Indiana University Jacobs School of Music, where she was the concerto competition winner and concertmaster. Her teachers include Yao-Ji Lin, Bin Chao, Dorothy Delay, Sally Thomas, Ida Kavafian, Paul Biss, and Miriam Fried. In addition, she has studied chamber music with Felix Galimir, Menaham Pressler, and Janos Starker. She frequently adjudicates as string judge in regional, state, and national music competitions. Her students have won top prizes in the Neale Silva Young Artists Competition and the WMTA State Young Artists Competitions.
Catherine Kautsky
Chair of Keyboard at Lawrence University, has been lauded by the New York Times as “a pianist who can play Mozart and Schubert as though their sentiments and habits of speech coincided exactly with hers … The music spoke directly to the listener, with neither obfuscation nor pretense.” She was the 2016 winner of the Lawrence Excellence in Teaching Award, the 2013 winner of the university’s Faculty Convocation Award, and in 2017 she was honored with the George and Marjorie Olsen Chandler Chair in Music. Her recent recording of the Debussy Preludes, released by Centaur in September, 2014, was said to “bring out all the power, majesty, and mystery of Debussy’s conception,“ and a recording of the complete Brahms Sonatas for Violin and Piano will soon be released by Centaur as well. Ms. Kautsky, whose teachers included Rosina Lhevinne, Gyorgy Sebok, Leon Fleisher, Martin Canin, and Gilbert Kalish, has concertized widely, performing in major halls such as Alice Tully Hall, Carnegie Recital Hall, the Phillips Collection, Jordan Hall, and the Chicago Cultural Center. She has soloed with numerous orchestras, including the St. Louis Symphony and Milwaukee Chamber Orchestra, and appeared frequently on public radio. She has spent two sabbaticals in Paris and played abroad in France, England, Italy, Spain, Poland, China, Hong Kong, Korea, Thailand, Brazil, Australia, Russia, and South Africa. Known as both a solo and collaborative performer, Ms. Kautsky has performed chamber music at the Aspen, Tanglewood, and Grand Teton Festivals, and presented masterclasses on five continents, including January 2018 appearances in Hong Kong, Ho Chi Minh City, and Hanoi.
Ms. Kautsky, whose students have won prizes across the country and gone on to leading graduate programs, has taught at Lawrence University Conservatory of Music since 1987, with a 6 -year hiatus as piano faculty and chair of the Keyboard Dept. at University of Wisconsin-Madison. Known for her cross-disciplinary interests, she was awarded the Arts Institute Creative Arts Award at UW-Madison and has presented frequently at national conferences on such topics as “On the Trail of Chopin and George Sand,” “WWI: A Centenary Look at the Musical Wars, “ and “Celebrating Debussy and the Arts du Spectacle.” Her articles have appeared in Clavier Companion, American Music Teacher, and International Piano, and her book, Debussy’s Paris: Piano Portraits of the Belle Epoque, was published by Rowman&Littlefield in September 2017. Reviewed by Booklist as "a fascinating fusion of music, literature, and social history," it has won accolades from eminent pianists across the country.
Ms. Kautsky holds a bachelor’s degree from the New England Conservatory, a master’s from the Juilliard School, and a doctorate from the State University of New York at Stony Brook.