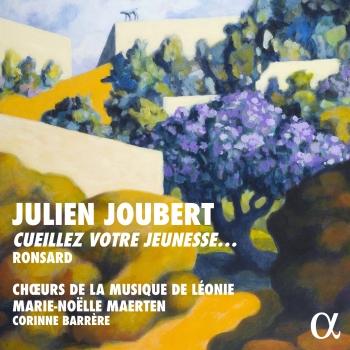 Marie-Noëlle Maerten
began her training with the "Petits chanteurs de Valenciennes" and at the Conservatory of the same city in singing and violin. She continued her training at the Lille Conservatory in the class of Claire Marchand. After having participated as a soprano in various vocal ensembles (Maîtrise de Radio France, Maîtrise Notre-Dame de Paris, Les Demoiselles de Saint Cyr and the Ensemble vocal Intermezzo), Marie-Noëlle Maerten turned to choral conducting.
Her reputation in the field of children's voice work has led her to give numerous training courses and to advise choirs in France. She is regularly called upon to conduct works for youth and adult choirs.
With "La Musique de Léonie", a structure offering training courses, concerts and creations for the greatest number of people, she created in 2008 the vocal ensemble "La bonne chanson" and then in 2011 the Maîtrise de Léonard, a children's choir based in Saint Jean de Braye which offers young people in the agglomeration a musical and vocal training linked to stage production.
Marie-Noëlle Maerten has been very involved in the Maîtrise de Radio France for many years and after having held the positions of assistant choir director, study advisor and pedagogical delegate, she was appointed deputy musical director of the Maîtrise de Radio France on December 1st, 2015.
Corinne Barrère
After a DEUG in musicology and a DUMI at the University of Toulouse le Mirail, Corinne Barrère joined the musical team of the Moulin des Sittelles, a musical center located in the Tarn. For 10 years she has been working and developing her experience with a wide range of audiences: schools, specialized structures, early childhood, choral singing, teacher training...
In 2005, her meeting with Julien Joubert and the team of La Musique de Léonie changed her professional orientation. She then discovered a deep interest in choral singing and embarked with them on an increasing number of ambitious projects.
Summer courses, amateur choir, Parisian choir, opera choir... and many other projects.
In September 2014, Corinne leaves the Tarn for the Loiret and fully integrates the team of La musique de Léonie by keeping a privileged link with some vocal ensembles of the Tarn with which she continues to lead some projects.