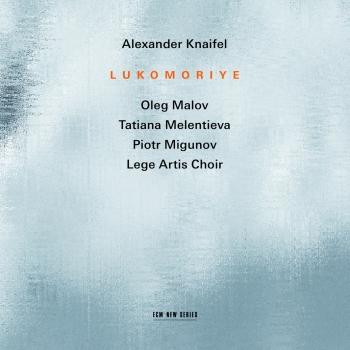 Alexander Knaifel
was born in 1943 in Tashkent but grew up in St Petersburg. He studied with Rostropovich and his relationship with him remained close until the great cellist’s death. Rostropovich features on Amicta Sole, the second ECM release of Knaifel’s music.
Knaifel was born into a Jewish family, but is also attracted by the Orthodox church and Buddhism; he has spoken of seeking to convey something of the heart of faith by "speaking in a low voice, hoping to hear a voice within oneself”. His music, described by the Frankfurter Rundschau as "one of the most important revelations of recent years", belongs to that circle of near-contemporaries and associates from the former Soviet lands which includes Arvo Pärt, Giya Kancheli, Tigran Mansurian, Valentin Silvestrov and Sofia Gubaidulina. But, although critics have found echoes of Arvo Pärt, John Tavener and Henryck Górecki in Knaifel’s quest for beauty, he has an idiom that is entirely his own, with its own expressive power.
ECM’s documentation of Knaifel’s work began with Svete Tikhiy (recorded 1997 and 2000), featuring the Keller Quartett with pianist Oleg Malov, and the voice of Tatiana Melentieva, the composer’s wife, processed by Andrei Siegle. Then, following Amicta Sole, the 2006 recording Blazhenstva presented two strikingly different compositions, inspirationally linked through the figure of Mstislav Rostropovich and played by his last cello student at the Moscow Conservatory, Ivan Monighetti.