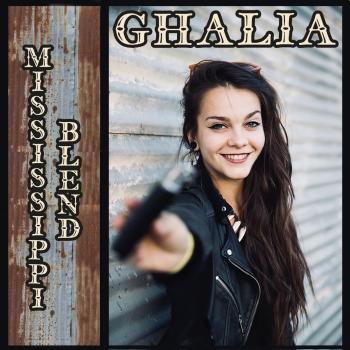 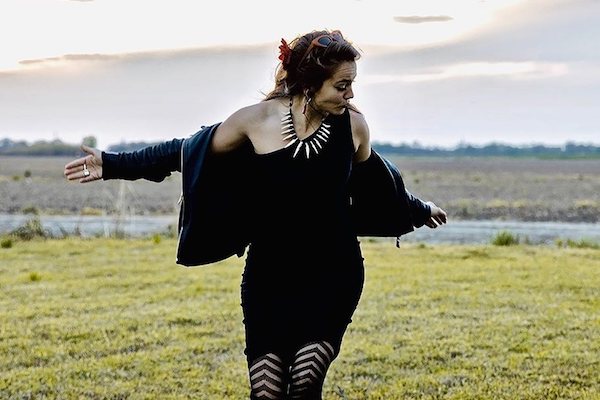 Ghalia Berge
You can’t miss Ghalia Volt. She’s the natural-born rock star with the leather jacket and wicked grin, leaning from her album sleeve to offer you a hit on her hip flask. But the real Southern blend ain’t in the bottle, it’s on the songs. Following the New Orleans flavours of her 2017 breakthrough, Let The Demons Out, this year sees the acclaimed Brussels-born singer-songwriter dive deeper into the American South, recording in the hill country of Mississippi, where she shared her songs with a cast of esteemed local musicians and caught the flying sparks. This is Mississippi Blend: an album as fiery and throat-burning as Delta moonshine.
But like any musician with the blues under their fingernails, Ghalia always burned to make a record in Mississippi. Right from the start, her vision for Mississippi Blend was clear. This was to be an album so raw it bled, recorded deep in the hill country, letting all the region’s favourite sons add their thumbprint and catching the vibe that blew on the breeze. “Raw and natural,” nods the singer. “With bleedings, minimal microphones used, a traditional approach with modern influences.”
Six years ago, Ghalia was a best-kept secret, her days spent busking on the streets of the Belgium capital, her nights shaking the city’s blues clubs. But as a die-hard R&B and blues fan, the singer-songwriter found the siren call of America too strong to resist. Visiting Chicago, Memphis and Nashville, Ghalia’s livewire talent saw her embraced by the musical motherland and elevated to headliner status.
Before long, on Let The Demons Out, she fused the groove of New Orleans with her own punk-rock attitude, hooking up with bassist Dean Zucchero, guitarist Smokehouse Brown and harmonica player Johnny Mastro from the Crescent City’s legendary band, Mama’s Boys. Commercially and creatively, this debut release made a seismic impact, hitting #1 on Louisiana’s Roots Music Report, #15 on the national Contemporary Blues Chart and #23 on the Living Blues Charts – while scoring Blues Album Of The Month in Classic Rock (“They’re an irresistible force”).
There was one studio that fit the bill. There was one studio that fit the bill. Owned and operated by, award-winning producer Jim Dickinson sons, Cody and Luther Dickinson, the Zebra Ranch in Coldwater, Mississippi, is a beacon of old-school production, where titans from T-Model Ford to R.L. Burnside have torn it up. But rather than being overawed by the studio’s history, Ghalia stepped up with her own songs and attitude, immersed in the Mississippi spirit. “I wanted this record to be organic, with hill country influences and the punk, garage and rock ‘n’ roll that I started with. I’m not trying to imitate any style, but letting my songs drive this music.”
Lyrically, these songs are Ghalia’s most powerful yet. “Meet You Down The Road is an emotive poem about the tragic loss of a loved one,” she says. “Drag Me Down is about never stopping doing what we aim to do. Squeeze is an erotic love song disguised in a cute, playful story. Why Don’t You Sell Your Children? speaks of a society in which common morals have become so increasingly depleted in the interest of greed that one’s next step might as well be to sell off your offspring for some extra cash.”
Ghalia sings up a storm, while playing soulful dobro and slide guitar. But this is anything but a one-woman show. Once again, Zucchero and Brown were the engine room, while every morning saw the singer welcome a new guest. On drums, you’ll find Cody Dickinson of the feted North Mississippi Allstars, alternating with Cedric Burnside, whose feel on the hill country-flavoured tunes would have made both his late father and grandfather proud. The veteran harp-blower Watermelon Slim duets with Ghalia on the dusty-road groove of Wade In The Water, while Lightnin’ Malcolm – a guitarist credited with keeping the hill country scene so healthy – plays searing leads. “The process of this record,” says Ghalia, “was an absolutely beautiful experience.”
By all means, take a slug on her hip flask. But don’t forget to play Mississippi Blend – and fall for the most powerful cocktail of star players and roots styles you’ll hear this year. “I just can’t wait,” says the singer, “to share this new album live…”