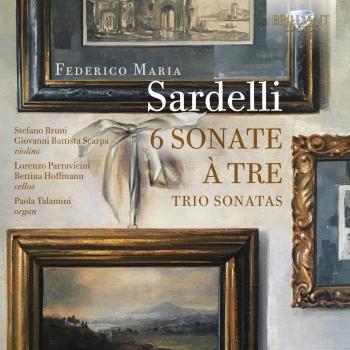 Stefano Bruni
achieved a diploma in violin at the Venice Conservatoire, and then continued under Enzo Porta and Daniele Pascoletti. He specialized in baroque violin with Stefano Montanari. He has played with the Offerta Musicale, Orchestra da Camera di Venezia, the Orchestra Regionale Filarmonia Veneta and the Teatro La Fenice orchestra. He has been a member of the Modo Antiquo orchestra since 2011, playing with the ensemble in many prominent international festivals. He has recorded with Brilliant, Naïve and Sony. He teaches Music at MIUR. Giovanni Battista Scarpa studied under Michele Lot and Enzo Porta, then specialized with Renato Zanettovich, Daniele Pascoletti and Cinzia Barbagelata. He has played with the Offerta Musicale, Orchestra da Camera di Venezia, and the Orchestra J. Futura, also as soloist, as well as with the Orchestra Filarmonica del Teatro La Fenice. He and Stefano Bruno have together worked on and performed rare music for violin duo. With saxophonist Emma Nicòl Pigato he also performs original works and transcriptions of baroque and classical compositions. He teaches violin at the Liceo Musicale Marco Polo in Venice.
Lorenzo Parravicini
studied the cello with Adriano Vendramelli, Marin Cazacu and Radu Aldulescu, as well as attending courses on musical phenomenology held by Christa Bützbenger. He has worked with numerous Italian orchestras, including the Offerta Musicale, performing throughout Europe as part of the chamber ensemble and as a soloist. He is a member of the La frottola ensemble specialized in medieval and renaissance works. He has taught cello in various schools and at the Liceo Musicale in Venice.
Bettina Hoffmann
plays the viola da gamba and cello, and is also a musicologist. As a soloist she performs with Modo Antiquo in prominent festivals and theatres throughout Europe. He many recordings include CDs devoted to Marais, Ortiz, Ganassi, Schenck and Gabrielli. Her two CDs with Modo Antiquo were nominated for Grammy Awards. She is author of the Catalogo di musica per viola da gamba and the book La viola da gamba that has been published in Italian, German and English. She has also written numerous articles and curated various critical editions. She teaches at the Vicenza Conservatoire and at the Scuola di Musica di Fiesole. Bettina also founded the Giornata Italiana della Viola da Gamba, for which she was awarded a medal by prior Italian President Giorgio Napolitano.
Paola Talamini
has been the principal organist at the Basilica della Salute in Venice since 1999. She took a diploma in piano, organ and organ composition, then specialist degrees in organ and harpsichord, in Gregorian chant at the Pontificio Istituto Ambrosiano di Musica Sacra, as well as a European diploma in early performance practice and a further diploma in liturgical music at the Pontifica Università Lateranense. She has taught sacred vocal music at the Seminario Patriarcale in Venice and music at the Istituto Cavanis in Venice. Alongside her busy concert schedule, she also continues her research work, publishing with Edizioni Carrara, Schotti, Il Levante, Libreria Editrice, Marcianum Press and Ut Orpheus.