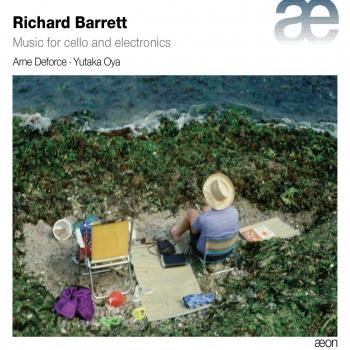 Barrett: Music for Cello and Electronics 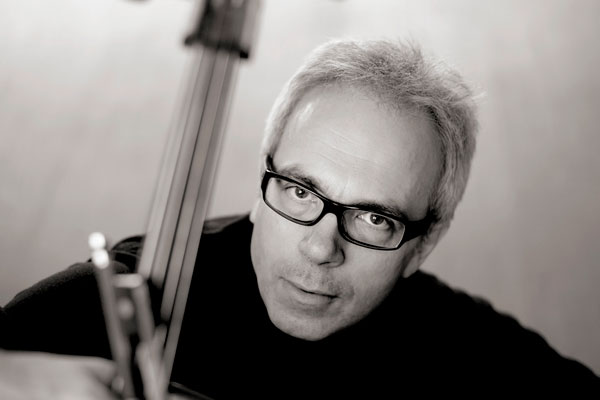 Arne Deforce
is renowned for his passionate and unparalleled performances of contemporary and experimental music. His inventive programmes explore new musical forms of expression in which the act of an uninhibited creative listening is foremost.
As a musician and researcher, he is fascinated by how, at the intersection between music, art, science and technology, new concepts and relationships in music can be developed between the instrument, musical gesture and electronics. As such, his collaboration on life-form (2012), a one-hour cycle by Richard Barrett for cello and electronics, or on the piece Foris (2012) by Raphaël Cendo, reflects the fact that a sound-world of untapped potential between the physicality of playing, technology and extended notations can further be developed in a collaborative project between composer and performer.
His repertoire is focused mainly on solo and chamber music, with a special interest in works by composers such as Iannis Xenakis, John Cage, Morton Feldman, Brian Ferneyhough, Jonathan Harvey and Karlheinz Stockhausen. His fascinating, energetic and imaginative approach to music has inspired many composers including Richard Barrett, Luc Brewaeys, Kee-Yong Chong, Raphaël Cendo, Hèctor Parra, Alvin Curran and Phill Niblock, to collaborate or to write original works especially for him. In 2004, after one such collaboration, Jonathan Harvey described Arne Deforce as “one of the most exciting new cellists I have come across. Everything he plays is approached with a powerful intensity born from an engagement with the music on a deep spiritual and psychic level. He is highly imaginative and brings an originality and, above all, creativity to his interpretations which is both fiery and structured.”
His collaborative partners include musicians such as Daan Vandewalle, Mika Vaino, Richard Barrett, Peter Jacquemyn and Yutaka Oya, in addition to Champ d’Action, Ictus, MusikFabrik, the Concertgebouw Brugge (Bruges), Centre Henri Pousseur Liège, Ircam Paris, and Grame Lyon. Arne Deforce is featured regularly at leading international new music festivals (Ars Musica, Holland Festival, ManiFesta–Agora Paris, Archipel Genève, Musica Strasbourg, Mito, Fondation Royaumont, Musica Sacra Maastricht, Huddersfield Contemporary Music Festival, Amsterdam Cello Biennale).
His remarkable discography – Giacinto Scelsi, Morton Feldman, Iannis Xenakis complete works for cello+1 (aeon); Jonathan Harvey (Megadisc); Phill Niblock (Touch); Mika Vaino (Mego) – has received international acclaim (five Diapasons d’Or, Coup de coeur de l’Académie Charles Cros, and in 2012 the Prix Caecilia).
In 2012 Arne Deforce received his PhD in the arts from the University of Leiden (in collaboration with the Orpheus Institute Ghent) on the performance practice of late twentieth-century complex music, with a thesis entitled ‘LABORINTH Π – Thinking as experiment: 472 Meditations on the need for creative thought and experimentation in performing complex music from 1962 to the present’.
Yutaka Oya
After graduating with a bachelor of Music degree from the Toho School of Music in Tokyo, the pianist Yutaka Oya continued his studies in Belgium. He has since been performing a vast repertoire, including many world premieres, at festivals and concert halls all over the world. Held in high esteem as a chamber musician, he enjoys a musical partnership of many years’ standing with Arne Deforce. Besides performing frequently with the Royal Flemish Philharmonic, he is a member of Ensemble Champ d’ Action and the Oya Piano duo.
Centre Henri Pousseur
Founded in 1970 by Henri Pousseur and Pierre Bartholomée, the Centre Henri Pousseur (formerly “Centre de Recherches et de Formation musicales de Wallonie”) had a pioneering role ever since and has been engaged in the creation, realization and distribution of electronic music and, speci cally, of mixed music.
The Centre Henri Pousseur is a place for experimentation, exchange and contemporary creation, where artists from the Fédération Wallonie- Bruxelles, as well as other national and international artists, can develop their projects.
The Centre commissions multiple pieces every year from national and international composers. Since 2009, the Centre awards every two years the Prix Henri Pousseur to a young laureate from a Conservatory of the Fédération Wallonie-Bruxelles. Through their own activities, like the Festival Images Sonores, the Centre supports the distribution of the works, created in their studios, without losing sight of other contemporary repertoire.
The activities of the Centre Henri Pousseur are realized by the generous support of the Fédération Wallonie-Bruxelles (General direction of Culture, Service of Music).