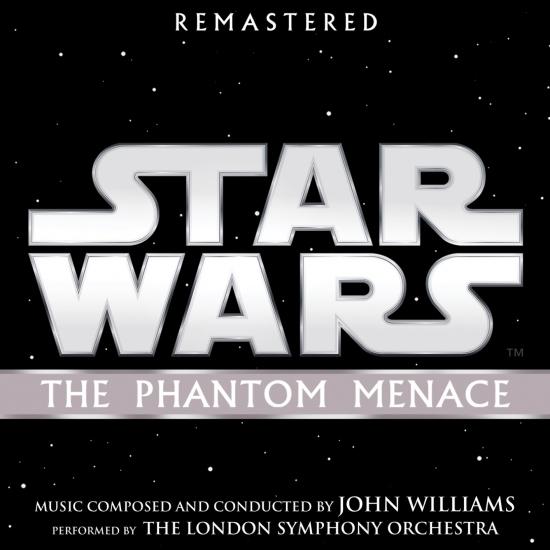 40th Anniversary-Edition: Walt Disney Records releases for the first time a 192kHz, 24bit edition of the remastered original motion picture soundtrack for Star Wars: "The Phantom Menace".
The original album was released to accompany the film (May 4, 1999). This release was certified Platinum in the U.S. and Gold in the UK, containing 17 tracks from selections of the score, meant to stand alone as a separate listening experience and not as one hears the score in the film. John Williams edited each track to present the score as one would hear it in a concert suite. Recorded in Abbey Road studios over a week, starting on February 10, 1999 performed by the London Voices and London Symphony Orchestra, Star Wars Episode I: The Phantom Menace was the first Star Wars score Williams had composed in over 16 years. The scores of the following two films would rely heavily upon tracking from this score, a decision that Williams and George Lucas had made early into production of the film.
"Once again, John Williams has exceeded my expectations and produced a lavish, rich, moving and thrilling score. Every fan of Star Wars—and of great music—is in his debt." (George Lucas)
The Star Wars cycle, George Lucas's stellar pop parable cum merchandising blitzkrieg, has long since made history as an unparalleled cinematic-cultural-marketing phenomena; somewhere Billy Jack should be in one envious, ass-kickin' mood. Phantom Menace, easily the most eagerly anticipated film of the '90s, returns to the saga's roots and allows Lucas to flesh out the history of some of the fable's core characters and conjure up a dazzling new cast of cohorts, antagonists, and alien realms for them to interact with and in. Thus, all composer John Williams had to do was essentially reinvent the world's most popular wheel. The film-scoring legend has admirably risen to that daunting challenge, delivering an inventive score whose dynamics should surprise and delight even the most ardent SW fanatic. The Main Title and a few oh-so-sparing bars of a familiar Jedi theme are all that remains from the original trilogy's lexicon, Williams having evolved the saga's musical language, stylistic reach, and orchestral palette with masterful subtlety. The composer's most ambitious surprise is the welcome addition of strong choral elements, which he uses in ways both majestic ("Duel of the Fates") and menacing ("Passage Through the Planet's Core"). And though the film revolves around a young boy (Anakin Skywalker, who will grow to be both corrupted and redeemed as Darth Vader), the only flirtation with cloying sentimentality comes with the innocently loping "Jar Jar's Introduction." In the tradition of the Cantina and Max Rebo's Band of the previous trilogy, Williams and Lucas close out this musical installment with "Augie's Municipal Band," a Carnivale-esque romp that segues grandly into the composer's swelling title music. Williams may be the master of a grand scoring tradition, but Phantom Menace is gratifying evidence that he seldom plays it safe--even when the Force is with him.
Digitally remastered