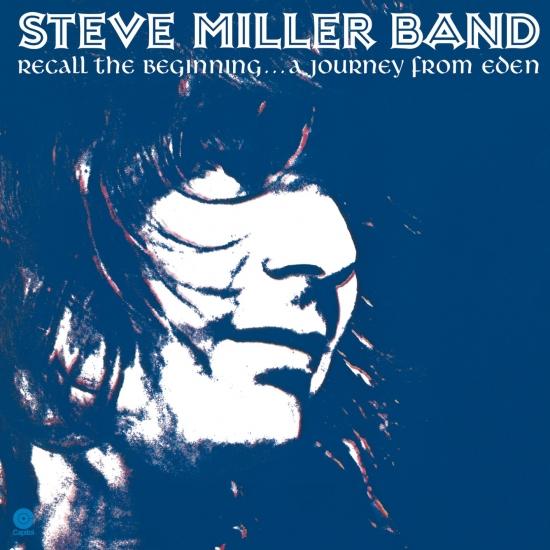 Info for Recall The Beginning…A Journey From Eden (Remastered)

Seventh album Recall The Beginning... A Journey From Eden was produced by SMB occasional keyboard player and co-writer Ben Sidran, and released in March 1972. The album featured another new line-up, with longstanding bassist Gerald Johnson appearing for the first time. Bed Sidran and Jim Keltner guest on keyboards and drums, and arranging legend Nick DeCaro handles the horns and strings.
The album features Enter Maurice (referred to in The Joker ) as well as the six-minute absolute classic Journey From Eden.
"After the resounding critical drubbing for 1971's lackluster Rock Love, Steve Miller's worst-received release at that time, he rebounded a year later with this eclectic and much stronger set. It's his seventh album and last as a cult artist before the commercial breakthrough of 1973's The Joker. The album, dedicated to Mahalia Jackson and Junior Parker, is split into two distinct sections. Side one dips into '50s doo wop with "Enter Maurice," acoustic folk-blues ("High on You Mama"), upbeat down-home pop ("The Sun Is Going Down"), and good-time R&B blues-rocking with horns ("Somebody Somewhere Help Me") that pre-dates Southside Johnny & the Asbury Jukes' similar style by about five years. But side two is where Miller really hits his stride, with beautiful, somewhat psychedelic folk-rockers that add his blues and rock roots to the string-enhanced acoustic ballad "Nothing Lasts," the haunting "Love's Riddle," and the shimmering closing title track, certainly one of his most endearing compositions (and the only selection to make the cut from this collection for his first career recap released later that year, 1972's Anthology). Nick De Caro's string arrangements are beautifully and expertly integrated into these songs and previous Steve Miller Band member Ben Sidran's production is sympathetic and spacious, as is veteran Bruce Botnick's (the Doors) engineering." (Hal Horowitz, AMG)
Steve Miller, guitar, vocals
Gerald Johnson, bass
Ben Sidran, keyboards
Dick Thompson, keyboards
Jim Keltner, drums
Roger Allen Clark, drums
Gary Mallaber, drums
Jack King, drums
Additional musicians:
Jesse Ed Davis, guitar on "Heal Your Heart"
Nick DeCaro, strings, horns
Produced by Ben Sidran
Digitally remastered