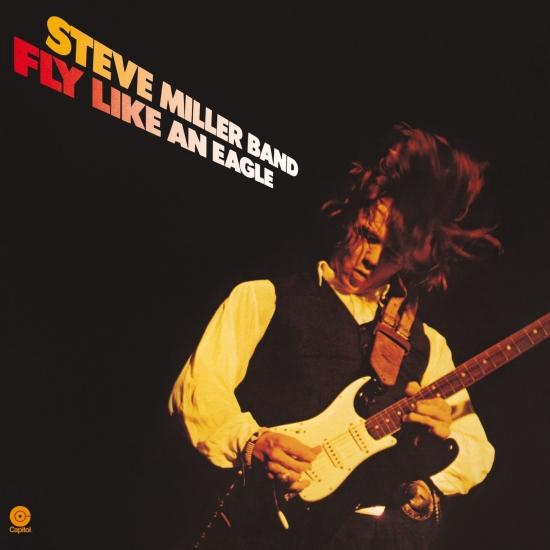 It took the Steve Miller Band eight years and nine albums before they finally hit the big time. They got a taste of it in 1973 when the title track to The Joker reached No. 1. But Fly Like an Eagle, which was released in April 1976, took Miller and his group to a whole new level.
Miller forsook his love of the blues for this and its sister project Book Of Dreams. In turning to mainstream pop/rock he became a huge star and developed the knack of delivering high-quality three-minute songs that were perfect for FM radio.
The album is linked by Miller's fascination with electronic sounds, sandwiched between the irresistible title track, the Bonnie and Clyde tale of 'Take The Money And Run', the irritatingly simple 'Rock 'n' Me' and the subdued 'The Window', with its quirky lyric 'ask my baby what she wants to be, she says a monkey in a tree'. His baby replies 'there's nothing greater than love', true enough. After all, it was Miller who rhymed 'northern California' with 'girls are warm yeah'.
"Steve Miller had started to essay his classic sound with The Joker, but 1976's Fly Like an Eagle is where he took flight, creating his definitive slice of space blues. The key is focus, even on an album as stylishly, self-consciously trippy as this, since the focus brings about his strongest set of songs (both originals and covers), plus a detailed atmospheric production where everything fits. It still can sound fairly dated -- those whooshing keyboards and cavernous echoes are certainly of their time -- but its essence hasn't aged, as "Fly Like an Eagle" drifts like a cool breeze, while "Take the Money and Run" and "Rock 'n Me" are fiendishly hooky, friendly rockers. The rest of the album may not be quite up to those standards, but there aren't any duds, either, as "Wild Mountain Honey" and "Mercury Blues" give this a comfortable backdrop, thanks to Miller's offhand, lazy charm. Though it may not quite transcend its time, it certainly is an album rock landmark of the mid-'70s and its best moments (namely, the aforementioned singles) are classics of the idiom." (Stephen Thomas Erlewine, AMG)
Steve Miller, vocals, guitar, keyboards, sitar, ARP Odyssey
Lonnie Turner, bass (all but 12)
Gary Mallaber, drums (all but 12), percussion
Additional musicians:
James Cotton, harmonica (11)
Curley Cooke, guitar (12)
Les Dudek, guitar (12)
Charles Calamise, bass (12)
Kenny Johnson, drums (12)
Joe (JD) D'Andrea, percussion (12)
John McFee, dobro (5)
Joachim Young, B3 organ (2, 12)
Recorded 1975-1976 at CBS Studios, San Francisco, California
Engineered by Mike Fusaro
Produced by Steve Miller
Digitally remastered