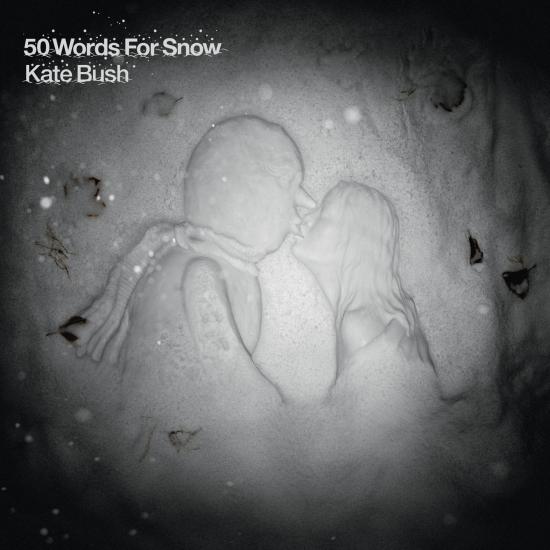 50 Words For Snow, Kate bush's tenth album, was released six months after her last LP, Director's Cut. Unlike Director's Cut, which saw Bush reinterpreting tracks from her back catalogue, 50 Words for Snow consists entirely of new material. There are seven tracks on the album, which has a running time of 65 minutes. Bush currently appears to be in the most productive part of her career since the early 80s. When she released the double album Aerial in 2005, it was her first release in 12 years after devoting herself to her family.
"Kate Bush's 50 Words for Snow follows Director's Cut, a dramatically reworked collection of catalog material, by six months. This set is all new, her first such venture since 2005's Aerial. The are only seven songs here, but the album clocks in at an hour. Despite the length of the songs, and perhaps because of them, it is easily the most spacious, sparsely recorded offering in her catalog. Its most prominent sounds are Bush's voice, her acoustic piano, and Steve Gadd's gorgeous drumming -- though other instruments appear (as do some minimal classical orchestrations). With songs centered on winter, 50 Words for Snow engages the natural world and myth -- both Eastern and Western -- and fantasy. It is abstract, without being the least bit difficult to embrace. It commences with "Snowflake," with lead vocals handled by her son Bertie. Bush's piano, crystalline and shimmering in the lower middle register, establishes a harmonic pattern to carry the narrative: the journey of a snowflake from the heavens to a single human being's hand, and in its refrain (sung by Bush), the equal anticipation of the receiver. "Lake Tahoe" features choir singers Luke Roberts and Michael Wood in a Michael Nyman-esque arrangement, introducing Bush's slippery vocal as it relates the tale of a female who drowned in the icy lake and whose spirit now haunts it. Bush's piano and Gadd's kit are the only instruments. "Misty," the set's longest -- and strangest -- cut, is about a woman's very physical amorous tryst with, bizarrely, a snowman. Despite its unlikely premise, the grain of longing expressed in Bush's voice -- with bassist Danny Thompson underscoring it -- is convincing. Her jazz piano touches on Vince Guaraldi in its vamp. The subject is so possessed by the object of her desire, the morning's soaked but empty sheets propel her to a window ledge to seek her melted lover in the winter landscape.
"Wild Man," introduced by the sounds of whipping winds, is one of two uptempo tracks here, an electronically pulse-driven, synth-swept paean to the Tibetan Kangchenjunga Demon, or "Yeti." Assisted by the voice of Andy Fairweather Low, its protagonist relates fragments of expedition legends and alleged encounters with the elusive creature. Her subject possesses the gift of wildness itself; she seeks to protect it from the death wish of a world which, through its ignorance, fears it. On "Snowed in at Wheeler Street," Bush is joined in duet by Elton John. Together they deliver a compelling tale of would-be lovers encountering one other in various (re)incarnations through time, only to miss connection at the moment of, or just previous to, contact. Tasteful, elastic electronics and Gadd's tom-toms add texture and drama to the frustration in the singers' voices, creating twinned senses: of urgency and frustration. The title track -- the other uptempo number -- is orchestrated by loops, guitars, basses, and organic rhythms that push the irrepressible Stephen Fry to narrate 50 words associated with snow in various languages, urgently prodded by Bush. Whether it works as a "song" is an open question. The album closes with "Among Angels," a skeletal ballad populated only by Bush's syncopated piano and voice. 50 Words for Snow is such a strange pop record, it's all but impossible to find peers. While it shares sheer ambition with Scott Walker's The Drift and PJ Harvey's Let England Shake, it sounds like neither; Bush's album is equally startling because its will toward the mysterious and elliptical is balanced by its beguiling accessibility." (Thom Jurek, AMG)
Kate Bush, vocals, bass, piano, keyboards, backing vocals
Dan McIntosh, guitar
Danny Thompson, bass
Del Palmer, bass
John Giblin, bass
Steve Gadd, drums (1, 2, 3, 4, 5, 6)
Elton John, featured vocal (5)
Albert McIntosh, featured vocal (1)
Andy Fairweather Low, featured vocal (4)
Michael Wood, featured vocal (2)
Stefan Roberts, featured vocal (2)
Stephen Fry (as Prof. Joseph Yupik), featured vocal (6)
Produced by Kate Bush
Digitally remastered