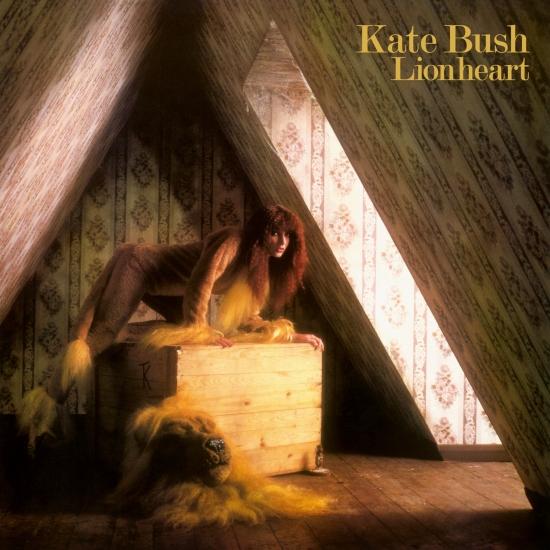 'Lionheart' is Kate Bush's second album, released by EMI Records on 10 November 1978.
Kate Bush is one of the UK music scene's most individual, creative and iconic solo pop stars. In her four decades in the public eye, her hits have included Wuthering Heights, Hounds Of Love, Cloudbusting and Running Up That Hill. She has won Brit and Ivor Novello Awards, and her music was used during the 2012 London Olympics Closing Ceremony. After being given a CBE by Queen Elizabeth II for her contributions to music in 2013, she returned to the stage for the first time in more than 30 years for 2014's rapturously received (and immediately sold out) Before The Dawn shows at London's Hammersmith Apollo.
Following the success of her 1978 debut album 'The Kick Inside' and its Australian number one single "Wuthering Heights," Kate Bush returned with second album 'Lionheart.'
'Lionheart' includes the hit single "Wow," which later featured on Bush's 1986 hits compilation 'The Whole Story.'
Kate Bush's influence can be seen and heard in contemporary artists such as Florence + The Machine, Tori Amos, Lady Gaga, Bat For Lashes, Marina & The Diamonds and Goldfrapp. She has collaborated with artists including Prince, Peter Gabriel, Pink Floyd's David Gilmour and Stephen Fry.
Reception to the album has been average, with the album almost universally being looked upon as an inferior version of her debut. NME's Ian Penman wrote: "'Mature' lyrics sung in that twee irritating schoolgirl-siren voice... Actually most of the time she's nearer a vague British lineage - Barbara Dickson to Lynsey de Paul - than a Joni/Janis wonderland". Record Mirror's Chris Westwood: "A product which is at best moderate, lacking and often severely irritating... This is flat conceived silliness." However, Dave McCullough in Sounds gave the album four stars and wrote: "You have to take her seriously in spite of all the flying sneers and jeers."
"Proving that the English admired Kate Bush's work, 1978's Lionheart album managed to reach the number six spot in her homeland while failing to make a substantial impact in North America. The single "Hammer Horror" went to number 44 on the U.K. singles chart, but the remaining tracks from the album spin, leap, and pirouette with Bush's vocal dramatics, most of them dissipating into a mist rather than hovering around long enough to be memorable. Her fairytale essence wraps itself around tracks like "In Search of Peter Pan," "Kashka From Baghdad," and "Oh England My Lionheart," but unravels before any substance can be heard. "Wow" does the best job at expressing her voice as it waves and flutters through the chorus, with a melody that shimmers in a peculiar but compatible manner. Some of the tracks, such as "Coffee Homeground" or "In the Warm Room," bask in their own subtle obscurity, a trait that Bush improved upon later in her career but couldn't secure on this album. Lionheart acts as a gauge more than a complete album, as Bush is trying to see how many different ways she can sound vocally colorful, even enigmatic, rather than focus on her material's content and fluidity. Hearing Lionheart after listening to Never for Ever or The Dreaming album, it's apparent how quickly Bush had progressed both vocally and in her writing in such a short time." (Mike DeGagne, AMG)
Kate Bush, vocals, harmony vocals, piano, keyboards, recorder, arranger, assistant producer Ian Bairnson, acoustic guitar, rhythm guitar, electric guitar (1, 2, 3, 6, 9, 10) Brian Bath, guitar (3) Paddy Bush, mandolin (3), harmony vocals (4, 5, 8), pan flute (8), slide guitar (4), mandocello (8) Richard Harvey, recorder (5) Duncan Mackay, synthesizer (9, 10), Fender Rhodes (1, 2, 4) Francis Monkman, harpsichord (4, 5), Hammond organ (6) Del Palmer, bass (3, 8, 10) David Paton, bass (1, 2, 4, 6, 9) Stuart Elliot, drums (1, 2, 4, 6, 9, 10), percussion (8, 9) Charlie Morgan, drums (3, 8) Andrew Powell, piano (8), harmonium (10) David Katz, orchestra contractor
Produced by Andrew Powell, assisted by Kate Bush
Digitally remastered