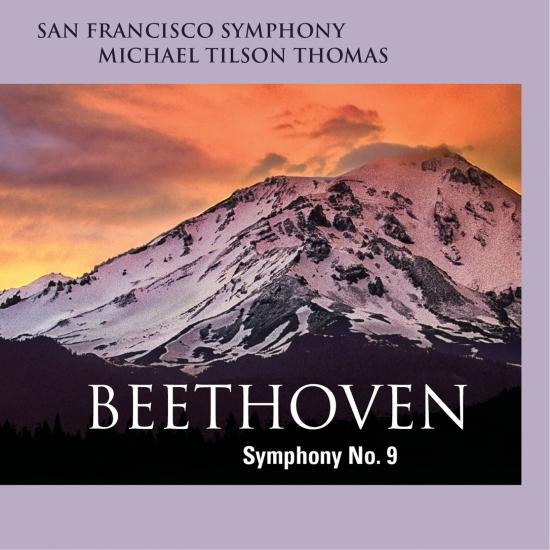 Info for Beethoven: Symphony No. 9

Michael Tilson Thomas and the San Francisco Symphony add to their acclaimed Beethoven discography with the monumental Ninth “Choral” Symphony, released in premium audio 96kHz, 24bit.
Michael Tilson Thomas and the Grammy award-winning San Francisco Symphony release an all-new recording of Beethoven’s monumental Ninth Symphony. From its stormy opening to the towering fourth movement, Beethoven’s final and perhaps greatest symphony is also one of the most universally loved. The album features the Grammy award-winning San Francisco Symphony Chorus, bass-baritone Nathan Berg, tenor William Burden, mezzo-soprano Kendall Gladen, and soprano Erin Wall. Beethoven’s Ninth is the latest addition to the San Francisco Symphony’s Beethoven discography, and is presented in premium audio 96kHz, 24bit.
„Mahler has been the mainstay of the San Francisco Symphony’s releases on its own label and this performance of Beethoven’s Ninth is conceived on a similarly grand scale. It is what you might call a ‘traditional’ interpretation, making no nods to historically informed practice in terms of pace or textural lightening, but that is by no means a negative factor in itself.
It was recorded last year during concerts at San Francisco’s Davies Symphony Hall, and the first movement makes an impact through its force, well-placed accents and sinew. It does not always have the clarity and lucidly defined orchestral sonorities that might place it above any number of other recordings of the Choral, and Michael Tilson Thomas lets a certain amount of portentous over-egging creep into the final bars. The Scherzo is clean and incisive. The slow movement draws on the rich tone of the San Francisco strings, with a judicious balance between them and the other orchestral colours, and the music’s inner momentum is nicely maintained; the crafting of phrases is carefully done. Launching into the finale, Tilson Thomas tackles the recitatives with a mix of spontaneity and fine tailoring, and lets the ensuing melody take its sublime course. The entry of the voices adds an appropriate dimension of drama but the overall impression is of a performance perfectly sound in its reasoning, with orchestra, chorus and soloists well prepared and alert to their expressive and technical responsibilities, but without the visionary quality to make it a front-runner.“ (Gramophone)
Erin Wall, soprano
Kendall Gladen, mezzo-soprano
William Burden, tenor
Nathan Berg, bass-baritone
San Francisco Symphony
San Francisco Symphony Chorus
Michael Tilson Thomas, conductor

Booklet for Beethoven: Symphony No. 9