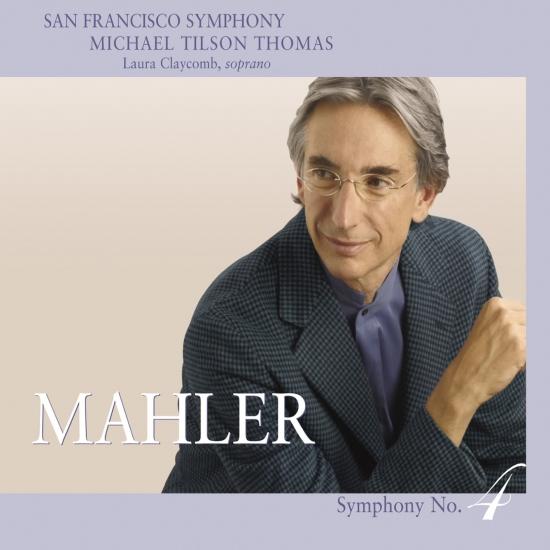 Info for Mahler: Symphony No. 4

The internationally best-selling, Grammy Award-winning partnership of Michael Tilson Thomas and the San Francisco Symphony continue their critically acclaimed Mahler cycle with Symphony No. 4. Mahler's Fourth is the most tuneful and upbeat of his symphonies. Its gloriously expansive slow movement offers a picture of heavenly terrain and its vocal finale, with American rising star soprano Laura Claycomb, is as freshly innocent as a folk tune. The exceptional standards set by this notable cycle are upheld in the outstanding performance and pristine sound quality.
Many a love affair with Mahler has begun with the sunlit Fourth Symphony. Mahler thought of it as a work whose transparency, relative brevity, and nonaggressive stance might win him new friends. Except for the finale, which he composed earlier, he wrote the symphony between June 1899 and April 1901, leading the first performance in November 1901 with the Kaim Orchestra of Munich. It enraged its first hearers.
The very qualities Mahler had banked on were the ones that annoyed. What was the composer of the Resurrection Symphony up to with this newfound naïveté? Most of the answers were politicized, anti-Semitic, ugly. Today, we perceive that what Mahler was writing was just a Mahler symphony, uncharacteristic only in its all but exclusive involvement with the bright end of the expressive range. But naïve? The rustic violin tune, yes, is so popular in tone that we can hardly imagine it didn’t always exist, but it is also pianissimo, which is the first step toward subverting its simplicity. Then Mahler accents it in two places, both unexpected. The first phrase ends, and while clarinets and bassoons mark the beat, low strings suggest a surprising though charmingly appropriate continuation. A horn interrupts them midphrase and itself has the words taken out of its mouth by the bassoon. At that moment, the cellos and basses assert themselves with a severe “as I was saying,” just as the violins chime in with their own upside-down thoughts on the continuation that the lower strings had suggested four bars earlier. And this game of interruptions, resumptions, extensions, reconsiderations, and unexpected combinations continues... (excerpt from liner notes by Michael Steinberg)
“one to rank alongside the blistering performance of the Sixth” (BBC Music Magazine)
Laura Claycomb, soprano
San Francisco Symphony Orchestra
Michael Tilson Thomas, conductor

Booklet for Mahler: Symphony No. 4