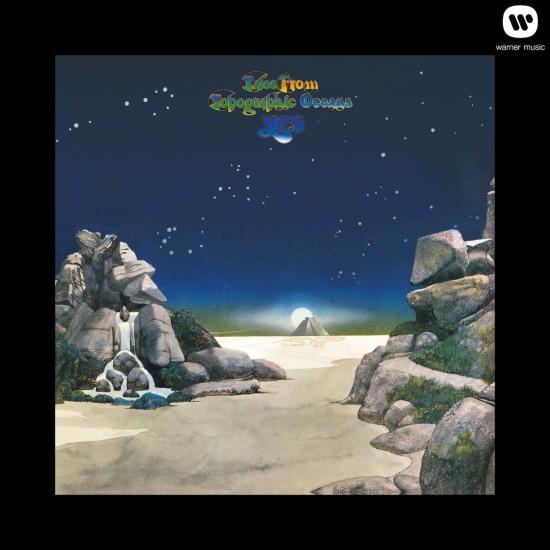 Info for Tales From Topographic Oceans

Four decades after its release, this is still the most controversial record in Yes' output. Tales from Topographic Oceans was the place where Yes either fulfilled all of the promise shown on their previous five albums or slid off the rails in a fit of artistic hubris, especially on the part of lead singer Jon Anderson and guitarist Steve Howe, who dominated the composition credits here.
Actually, the group probably did a bit of both here across 80 minutes of music; the group's musical ambitions were obvious on its face, as it consisted of four long songs (really suites) each taking up a side of an album, and each longer than the previous album's side-long 'Close to the Edge.' And Tales had a jumping-off point that was as far advanced in complexity and density as Close to the Edge had been out in front of its predecessor, Fragile, -- and all of it made The Yes Album seem like basic rock & roll.
Anderson, by virtue of his voice and lyrics, is the dominant personality on Tales, and his fascination with Eastern religion is fully manifest, as never before (or since). Confronted by song titles such as 'The Revealing Science of God,' and a concept derived from the Buddhist Shastric scriptures, the casual listener might have felt in need of both a running start and a sheet of footnotes: Yes keyboard player Rick Wakeman clearly felt something along those lines, as it was while making this record that he decided to exit the group. And, yet, Tales contains some of the most sublimely beautiful musical passages ever to come from the group, and develops a major chunk of that music in depth and degrees in ways that one can only marvel at, though there's a big leap from marvel to enjoy. If one can grab onto it, Tales is a long, sometimes glorious musical ride across landscapes strange and wonderful, thick with enticing musical textures; it offers the Yes fan the chance to be a true 'astral traveler.' Apart from one percussion break by Alan White that doesn't come off (if there had to be a Yes album with a percussion solo, why couldn't it have come along when Bill Bruford was in the band?), the music never falls flat, and it's a pity that Wakeman couldn't appreciate the richness and vitality he brought to the album. And Anderson and Howe get to work in an extraordinarily wide range of musical voices. In another reality, perhaps the gorgeous, folk-like passages on Tales would have spawned songs of four or five minutes, but here they are, woven into these long-form pieces, and if one can take the plunge into these particular sonic oceans, and comfortably stay under long enough, it's a journey that will reward. But it's not a trip for everyone -- or even every Yes fan -- to take, especially not too soon after discovering the album. (Bruce Eder)
Jon Anderson, vocals
Steve Howe, vocals, guitar
Chris Squire, vocals, bass
Rick Wakeman, keyboards
Alan White, drums
Recorded at Morgan Studios, London, England
Digitally remastered by Joe Gastwirt
No. 1 on the UK Albums Chart for 1973
No. 6 on the US Billboard 200 Chart for 1974
Certified Gold by the RIAA (US) and BPI (UK) in 1974