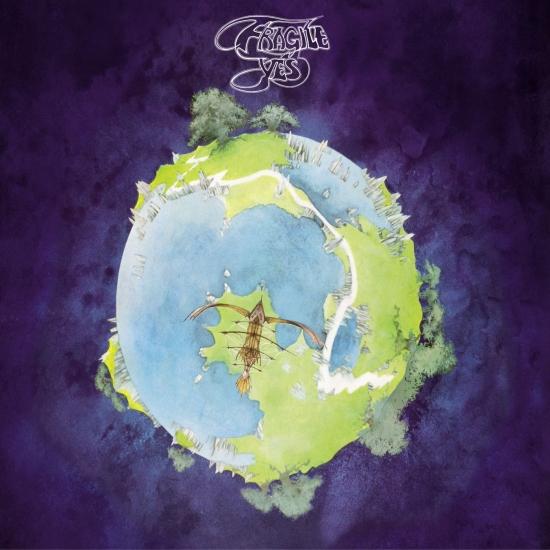 Propelled by the timeless hit "Roundabout," Yes' fourth album, Fragile, became an instant classic and is undoubtedly one of prog-rock's finest moments. It was the first Yes record to feature Rick Wakeman on keyboards and the first to display the inimitable artwork of Roger Dean. By far the most successful and enduring progressive rock group ever, Yes have been navigating the sonic stratosphere for more than three decades. Weathering myriad personnel changes and as many musical trends, their popularity has endured like granite. As Q Magazine put it, Yes are "the long haired dads of Radiohead."
The sure and steady pace at which Yes has progressed through their four albums seems to suit them just fine, and in Fragile the fruit is at last beginning to ripen.
Some problems remain, however: They're good and they know it, so they tend to succumb to the show-off syndrome. Their music (notably "Cans and Brahms" and "We Have Heaven") often seems designed only to impress and tries too hard to call attention to itself. Is anyone really still excited by things like "Five tracks on this album are individual ideas, personally arranged and organized by the five members of the band..etc." They've got it in them to do a lot more than provide fodder for those strange people who get it off to visions of keyboard battles between Rick Wakeman and Keith Emerson. Then too, with the nimble Wakeman and his many instruments, a guitarist (Steve Howe) who can finger-pick like the devil and, apparently, a wealth of collective imagination, they could inject at least a tad more variety into their work. As it is, most of the songs sound like variations on one idea rather than distinct entities sharing a common style.
But make no mistake - the Yes people have a lot to be excited over. Gorgeous melodies, intelligent, carefully crafted, constantly surprising arrangements, concise and energetic performances, cryptic but evocative lyrics - when all these are present Yes is quite boggling and their potential seemingly unlimited. As in the opening "Roundabout," marked by a thick, chugging texture which almost imperceptibly accumulates, during deceptively innocent little breaks and fills, a screaming, shattering intensity that builds and builds until suddenly everything drops away but Wakeman's liquid organ trills, some scattered guitar notes and Jon Anderson's pure, plaintive voice: "In and around the lake/Mountains come out of the sky and they/Stand there." It's a tour-de-force, a complete knockout, and perhaps the most quietly devastating moment to appear on a record in recent memory.
The heavily atmosphearic "South Side of the Sky" is also a grabber, a song that goes from full chorus and band (that's loud) to a segment that is nearly Oriental in its pristine simplicity -- just wandering piano, electronic swirlings and the whoosh of an icy wind. "Heart of the Sunrise" is the third extended cut, and it puts everything they've got into a wide-ranging and most impressive package which demonstrates that progressive (remember progressive rock?) doesn't mean sterile and that complex isn't the same thing as inaccessible.
When it's all working, the music made by Yes is what the best music always is, a powerful and emotional experience. It's probably the first music to come along since some of the Kinks' older stuff that actually brings the beginnings of tears to these jaded eyes of mine. Don't be it can't happen to you. (Richard Cromelin, Rolling Stone)
"It would not be too great an assumption to say that Yes will be this years "supergroup." They are musical eclectics, taking that which is good from classical and fusing it to form a sound which is uniquely theirs. This album is vibrant, soothing, tumultuous, placid and instrumentally brilliant. Jon Anderson's plaintive vocals are deliciously ingratiating. Highlights are "Roundabout," "Heart of the Sunrise," and "Long Distant Run Around." (Billboard)
"The breakthrough album for the band, in which the science-fiction and fantasy elements of the songs become dominant and the addition of Rick Wakeman on organ added a larger-than-life element to the group's sound. Ironically, the album was a patchwork job, hastily assembled to help cover the cost of Wakeman's expanded array of instruments, but the short form of "Roundabout" clicked on AM radio, album buyers liked the long version, plus the rest of the material they found, and the band was made." (Bruce Eder, The All-Music Guide)
Jon Anderson, vocals
Chris Squire, bass and vocals
Rick Wakeman, keyboards
Bill Bruford, drums
Steve Howe, guitars and vocals
Digitally remastered.